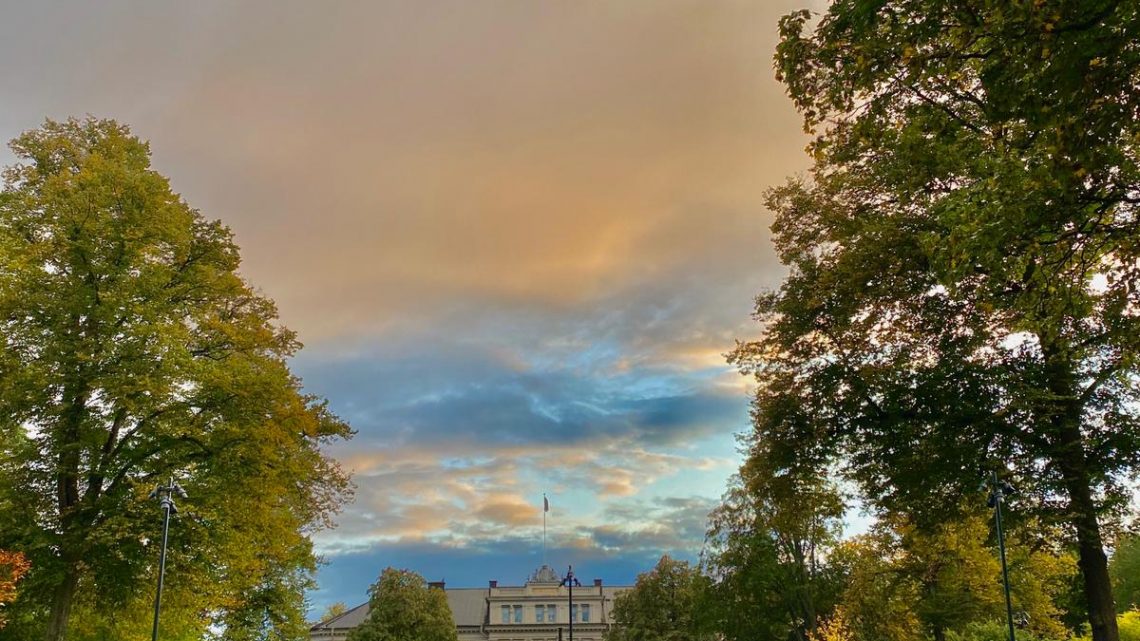 The city's townhall framed by the last sunrays of a late summer day (Photo: Franciska Horváth)

Approximately three thirds of a year ago, I left a pretty restricted Germany and traded it for Sweden.  The nation has been praised by many for its courageous path regarding covid-politics, criticized by even more. While the entire world has tried to fight the pandemic using upmost caution and strict rules boiling down social life to a minimum, the Swedish government relies on the common sense of the people, allowing a fair amount of turmoil in the streets and cafés.

Spending my time there as an exchange student pretty much felt like a fever dream. In retrospect, it was not so much academically but all the more emotionally challenging. The weight of guilt for utilizing these politics that I previously had called out to be problematic pressed down on me. Quite frankly, I ignored my conscience as far as possible, so that I could enjoy the privileges I was granted.

One of those privileges was that I was gifted friends of various cultural backgrounds. Though we were raised on different values and customs, we weirdly stood united in tackling life in an international student accommodation resembling a wild, wild blend of uncertainties, parties and a covid-outbreak.

Stranded on the reef of pandemic reality, I gratefully take every opportunity to shift back. This column can be taken as a post-exchange therapy, I would, however, regard it as an attempt to provide information of various sorts for those who can`t decide whether to go abroad or not. It will also portray the partner university of FH Kiel, Jönköping University. My informants will either still be in Sweden or already back in their home countries, talking about life in a foreign country, the Swedish covid policy, culture shocks, reverse culture shocks and everything that comes up naturally.

Franciska was one of the first people I met and I very soon started to call her a dear friend of mine. Born and raised in Hungary, she decided to start her studies in Jönköping. Since august last year, she now calls the city her new home. Quite a big step that undoubtedly takes guts. Yet also a good prognosis for getting some unapologetic insights. The stage is now yours

Franciska, you have left home to start your studies abroad. What made you choose Jönköping University?

I always wanted to study abroad, especially Scandinavia. A very close friend of mine who is also hungarian moved to Jönköping one year before I did. She was my informant, so to say, since she provided me with information about life in Sweden and how the University works. So I guess you could say she dragged me into this.

What did you expect from this decision, going to Sweden and all?

Well, I had high and low expectations at the same time. I had an preformed image of Sweden and the people here, since I had been to Sweden a couple of times already. So in fact, there were quite some stereotypical ideas In my head and to be completely honest – most of them are true. Speaking about the school, I did have some concerns about how hard it is going to be in the end, since I heard about the pretty high educational standards in Scandinavian countries. But it’s actually easy. The communication at the campus between teachers and their students is so open and uncomplicated, totally unlike everything I was used to in Hungary.

You mentioned stereotypes about swedes. Could you give me some examples?

One big stereotype that I found out to be true is, that swedes speak English at a very high level. Whenever I approach someone in English, they immediately tag along. Almost naturally without having to think about it too much or making you feel like it is much of a burden for them. One time, I really must have looked lost and some elderly woman came up to me and started to ask me something in Swedish, after I told her that I did not understand, she switched to English. That made a big impression on me, since most old people I know are very far away from being as fluent. Also, they are very observant of people, let things take time and just very calm in general. Jantelagen (which is an unwritten social rule not to be egocentric and never too brag about oneself in Scandinavian cultures) really speaks for itself, I think. They really live by it.

What do you appreciate most about your study-life?

Oh, that must be the interculturality here. It is next level international here. You meet people from around the globe on a daily basis. I mean, I expected it from all the information I got before about the university, but that is more than I could have imagined. I also appreciate how open everyone is. Especially for a melting pot like it is, everyone’s still very open. The teachers are chill, I get along with them very well. Another aspect is how many new trends are being incorporated in my studies. We are being asked to keep up with the latest trends. We have many projects where we need to sort out our own ideas in groups so that we get the best possible outcome in the end. I guess that makes up for a pretty good preparation for work life later. Working in groups with many people and all that.

How would you rate your personal growth for the time already spent in SWE? What challenged you? Was there a time when you regretted your decision?

I never regretted coming here, that’s for sure. Even if I hit rock bottom, it wouldn’t have crossed my mind to go back or something. But yeah, at the beginning it was challenging. Leaving my parents after I spent 20 years living with them. Switching from that to suddenly living with 35 students from different cultures was hard. Having to adapt to something new is always exhausting. I also think that up to this day I am still not fully adapted. So I really started to work on looking after myself, prioritizing myself. That doesn’t mean I am doing wellness all the time, but rather changing my daily structure so that I feel my best. If you’re not taking care of that, nobody else will. That has become an important part of my personal growth. I have to incorporate doing my laundry, meeting and keeping contact with friends, cooking and studying in my day. That is all up to me. I have to watch my expenses. Which can be very stressful really, but I am proud to say that I am doing fine financially. Knock on wood. I try not to go too crazy on anything. At times it can be hard though, since there are many temptations. Friends convincing you to have some more drinks or going for fika (a Swedish tradition to have some time off and enjoy some coffee and cake with friends or colleagues during the day), you know the drill.

That’s a tough one. There’s just too many good experiences, so you are really putting me on the spot right now. I will just be lazy and take the last one from a week ago. The entity of Beta House (the student accommodation Franciska lives in) had a barbecue at Vättern (one of sweden’s biggest lakes, Jönköping is located directly on the shore). It was raining and windy and the temperature was probably not higher than 9 degrees, so not your typical barbecue weather. Later 10 swedes joined and we played drinking games. It was weirdly surreal and I found myself thinking ‘I am starting to become Swedish, not even the bad weather is stopping me from having a good time anymore’. That was a big one for me but really, it is hard to choose. There are countless.

Saying goodbye to my parents. And also the moving. Because in this process it dawned on me that I will start a new chapter without having them near me. That was heartbreaking and tearful, I had never felt anything like this before. I think I cried two days straight and I wouldn’t want to go back to feeling like this. I still occasionally get homesick but it has gotten better. It’s strange really, because that makes coming to Sweden the best and the worst thing simultaneously.

Is there something you wish you had known before?

I wish I had known that I am spending a ridiculous amount for nine square meters. I mean don’t get me wrong, I love living in Beta. Love having many people around me and as soon as I want to have some time for myself I just go to my room. But yes, I really enjoy the company and the people you see every day. For example, last week I felt a bit down, not really at my peak. I sat alone in the kitchen and more and more of my housemates arrived. They didn’t pressure me to talk about what was bringing me down or anything but just their presence cheered me up, that’s what I needed. But the prices in general crack me up. Sweden is ridiculously expensive.

Windy, in Caps Lock. International. Beautiful. Sounds cliché, but it really is beautiful. 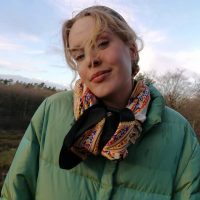 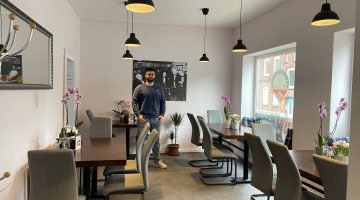 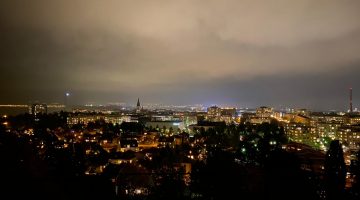